It is very important that we have a strong relationship with our Alumni, as your engagement is critical to the present and future of our school. We look forward to getting and keeping you involved. Please see the FAC ALUMNI CONNECTION, VOLUME 1, and complete the alumni survey. 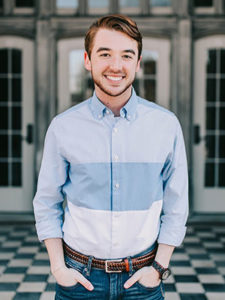 The UT Extraordinary Campus Leadership and Service awards recognize graduating students who are extraordinary campus leaders for their significant service to others. Arden Gillchrest is a first-generation college student who has enjoyed being an active part of the University of Tennessee. Through academic endeavors, student organizations, and community involvement, Arden has loved being a part of the Volunteer community.
Read the full article here.

FAC alumni and UT Architecture Student Combines Design and Entrepreneurialism for UT System Project. Allie Ward Chamberlain, 5th-year Architecture student and small business owner of Reclaim Creative, was approached by the UT Foundation in 2020 with interest for her to create an artistic design for UT System’s “Everywhere You Look, UT” campaign. The campaign seeks to raise awareness of the university’s impact across the state.

Chamberlain, who graduates in May 2021, was commissioned to create an original watercolor painting and from that, 150 prints that include all four UT System campuses. Her role in the project was all-encompassing. Using her design skills and entrepreneurial spirit, she had full creative license on the style, formatting and layout of the project. 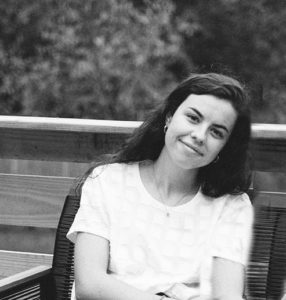 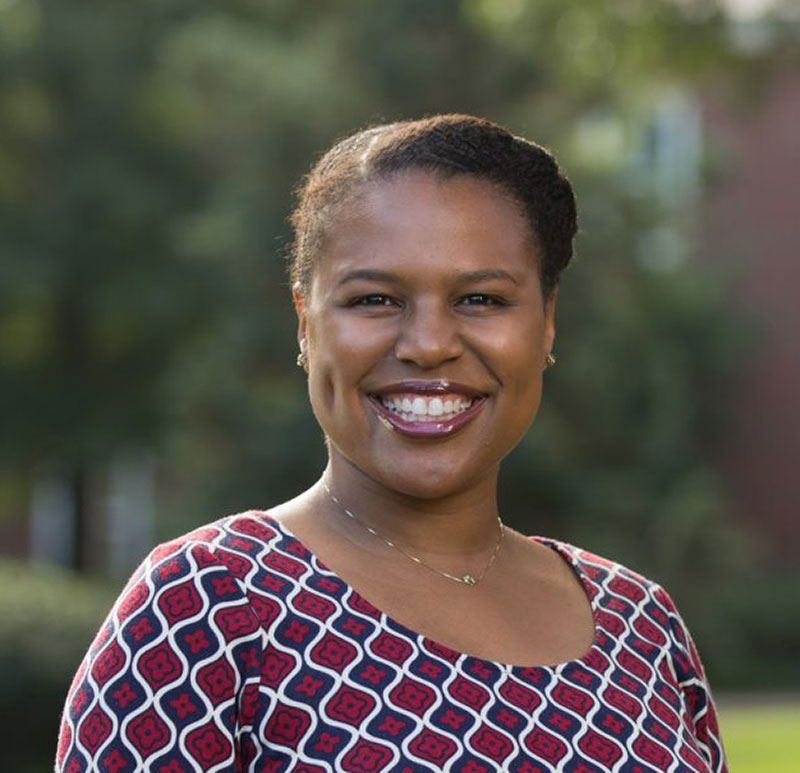 Dr. Shaniece Criss, a 1998 graduate of Southside High School and the Fine Arts Center, is an Assistant Professor of Health Science at Furman University. After receiving her undergraduate degree in communications from Oglethorpe University and a Master of Public Health from Emory University, Criss earned a Doctor of Science degree from Harvard’s T.H. Chan School of Public Health. She also earned a Master in Public Administration from the Harvard Kennedy School of Government, where she was awarded a Presidential Public Service Fellowship and a Political Campaign Practicum.​ Dr. Criss served as producer and host for a national television show for the Ministry of Health in Guyana, South America, during her Peace Corps service. She partners with Furman’s Institute for the Advancement of Community Health as an academic lead on projects with Prisma Health-Upstate and LiveWell Greenville. Dr. Criss serves on the Travelers Rest City Council and the board of directors for Prisma Health, Public Education Partners, Dining for Women, and SC YMCA Youth in Government and Teen Achievers. 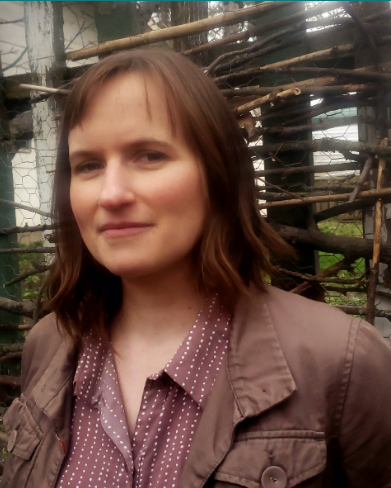 Stacy Isenbarger’s creative pursuits include sculpture, installation, mixed-media drawings, student mentorship and supporting community exchange through art.  In her studio practice, she works to create dialog by highlighting perceived boundaries built from one’s environment or their perception of it. Through explorations of unexpected material collisions, poetic narratives, and shared iconography, Isenbarger continuously seeks ways to express complex negotiations of place and the desire to feel whole within it.

Isenbarger has worked as a Foundations Educator in some capacity since 2007 and has been involved with FATE since 2010, serving as FATE’s SECAC Representative in 2011-13, President in 2013-2017, & VP of Communications in 2017-18. In the summer of 2020 she co-created the pedological studio art project share website www.WhatDoWeDoNow.art with fellow FATE board alum Assistant Professor Naomi J. Falk.  As Foundations Coordinator and Associate Professor of Art + Design at the University of Idaho in Moscow, ID she further celebrates her opportunities to explore creative communication and empowerment. She received her BFA at Clemson University & her MFA from the Lamar Dodd School of Art at the University of Georgia—two places she has tremendous gratitude for especially in regard to how both experiences shaped her approach to teaching. When she's not teaching or making—and sometimes when she is—she's usually dancing since the act continuously validates her joy of community acceptance and shaking up space.

Allison Boyd founded Metro Music Makers as a private Atlanta-based music studio offering in-home music lessons. She has been teaching since 1992 (sometimes as many as 78 students per week herself), with students ranging from 3 years of age to senior citizens, and those with special needs. In addition to overseeing a variety of instructors in the Metro Music Makers family, she is a board-certified Music Therapist licensed in the State of Georgia. Allison’s music therapy experience includes working in special needs classes, in private behavioral therapy and research with children diagnosed with autism, in music therapy and research with neonates, as a music therapist at a drug and alcohol rehab for teens, and as a music therapist in mental health settings working with adults diagnosed with a range of disorders including schizophrenia, PTSD, depression, bipolar disorder, anxiety and dissociative disorders.

Allison’s flexibility working in diverse positions and environments gave her the training needed to begin Metro Music Makers in 2002. As parents learned about her music therapy background, she began to get requests for adaptive lessons for students who might not otherwise find success in traditional lessons Allison currently serves as the co-president of EO Atlanta’s Accelerator Program, a global entrepreneur organization whose mission is to help small business owners catapult their growth beyond $1M in revenue. Additionally, Allison is a member of the Music Teachers National Association, the Georgia Music Teachers Association, the North Fulton Music Teachers Association, and the Music Therapy Association of Georgia. Allison adjudicates events sponsored by the National Guild of Piano Teachers and the Georgia Federation of Music Clubs. Allison’s students have achieved many honors over the years. She has seen over 250 of her students make top marks in the National Piano Guild Auditions and National Federation of Music Clubs Festival since 2003. 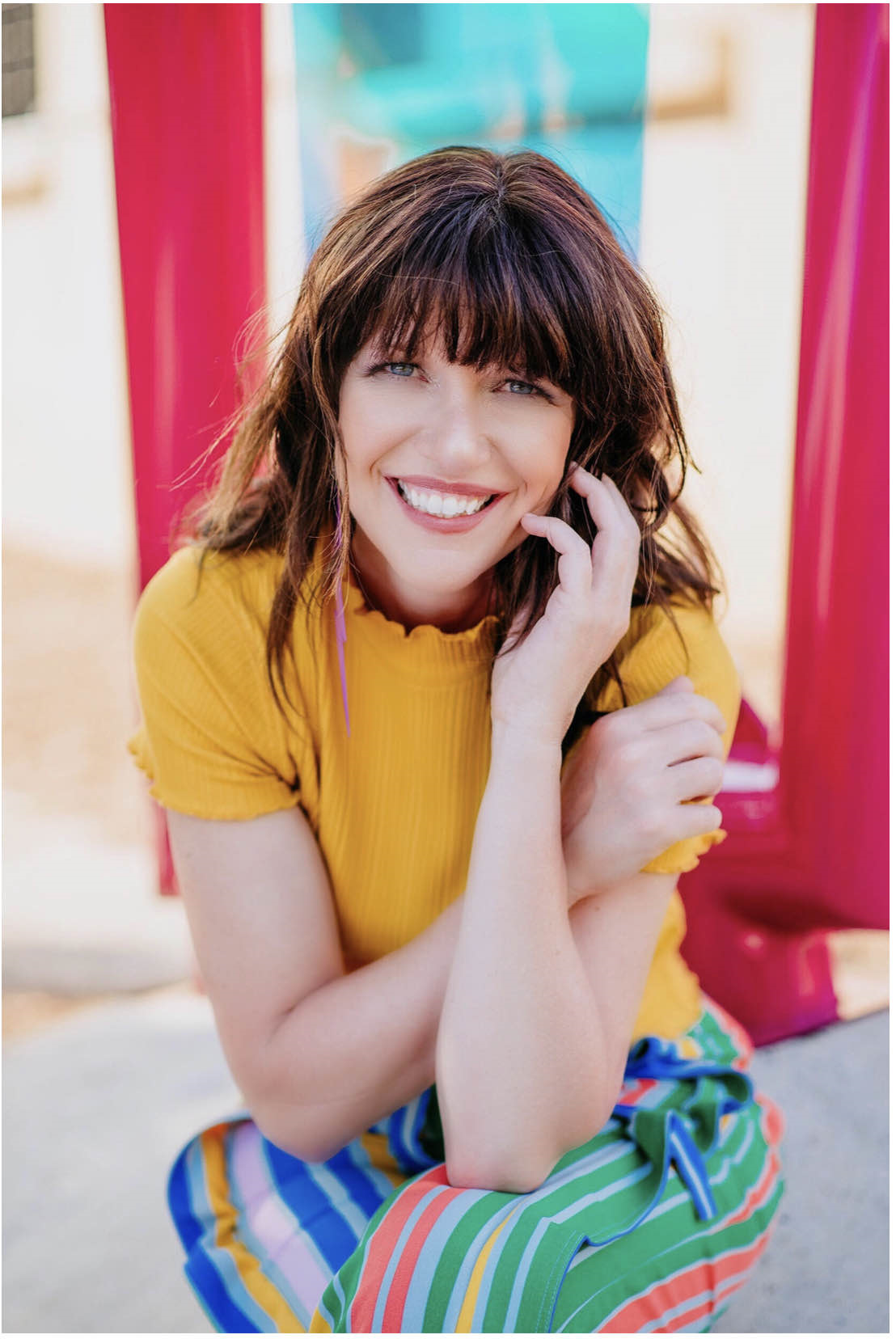 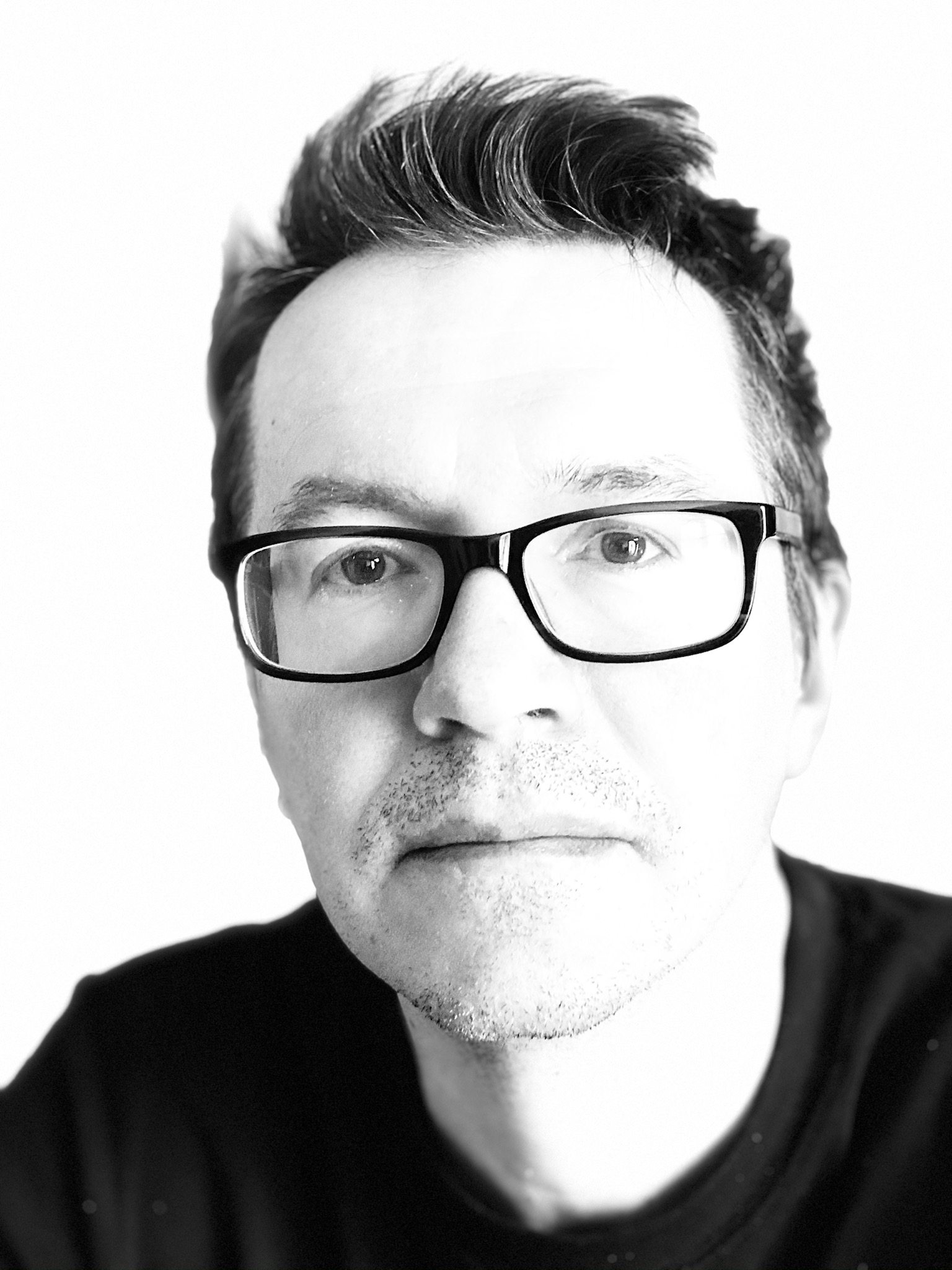 Ben Sutherland is a composer, music technologist, performer, and educator
whose work and interests span a multitude of media and genres, including classical, popular, and experimental. His contemporary classical works have been performed by renowned ensembles including the Pacifica String Quartet, the Contemporary Chamber Players, and the Aspen Contemporary Ensemble.

His compositional, research, and performance interests find a nexus in his work with interactive computer music systems, and in particular, systems of musical gesture acquisition, analysis, and processing. He has presented at conferences including New Interfaces for Musical Expression (NIME), the Porto International Conference on Musical Gesture as Creative Interface, the Society for Electro-Acoustic Music in the United States (SEAMUS), and the Symposium of Laptop Ensembles and Orchestras (SLEO), and he is one half of the interactive computer music duo, “The Machine is Neither…,” with Emma Hospelhorn.

Alongside these endeavors, Ben has also been involved with numerous projects in popular, "underground," and cross-cultural genres, maintaining connections to his “musical roots” as a multi-instrumentalist and vocalist, songwriter, and arranger. He holds a B.A. in Music from Oberlin College/ Conservatory and an M.A. and Ph.D. in Music Composition from the University of Chicago. Ben is currently the Chair of Audio Arts and Acoustics at Columbia College Chicago.

Marcus is a 24-year-old songwriter and guitar phenom who is taking the music scene by storm. The Marcus King Band’s most recent release, “El Dorado,” was nominated for Vintage Guitar Magazine’s Readers Choice Award.

We received more great news when we learned that "El Dorado" was nominated for a Grammy Award in the category of "Best Americana Album." Congratulations, Marcus!

Check out the Marcus King Band at https://marcuskingband.com/!. 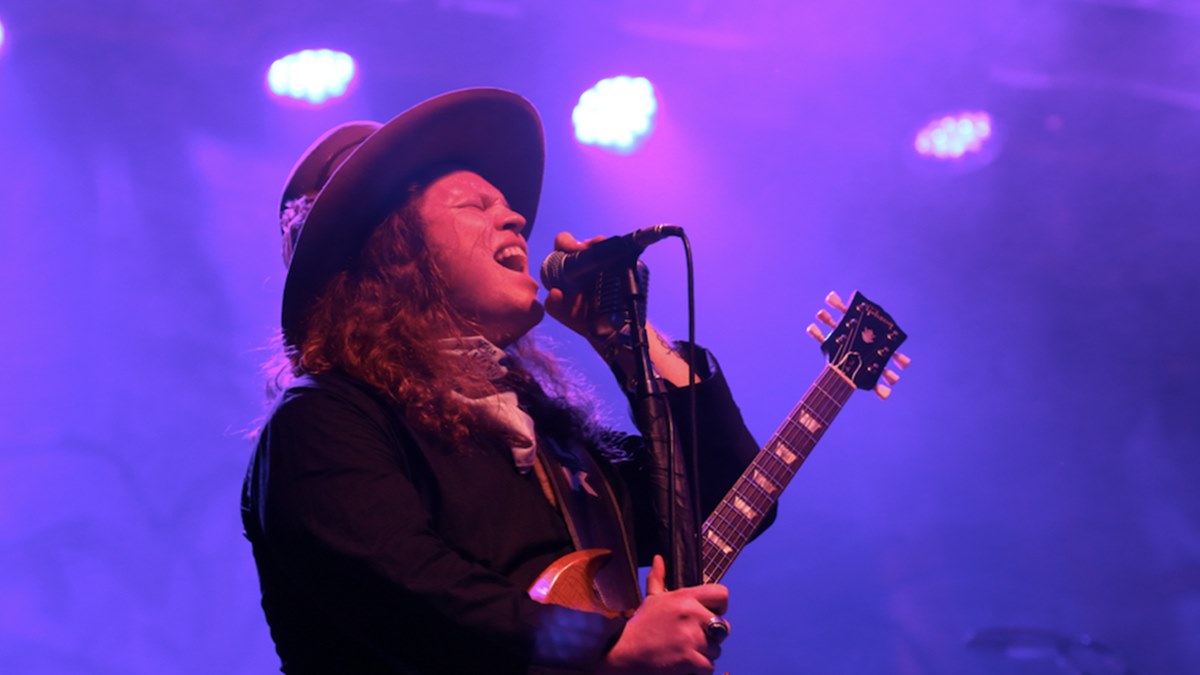 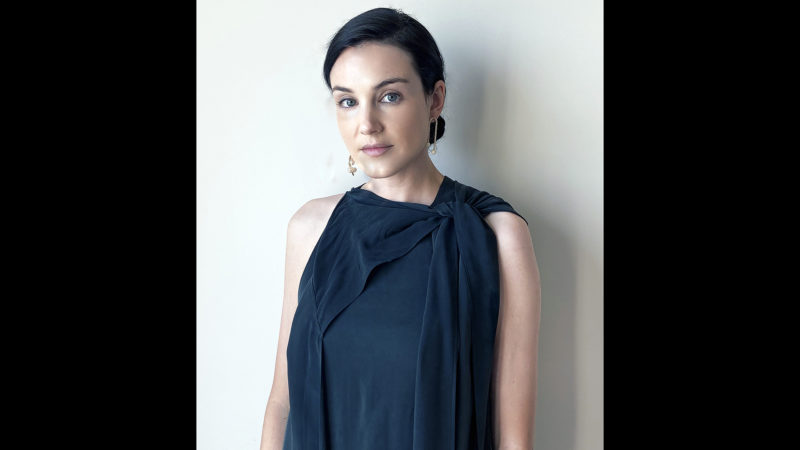 Sabrina is a 2020 graduate of FAC, attending MICA in Baltimore, MD. Sabrina's beautifully printed and sewn fabric book is a finalist for the Dorothy Waxman Textile Prize (a prestigious international award for fiber and fashion students). 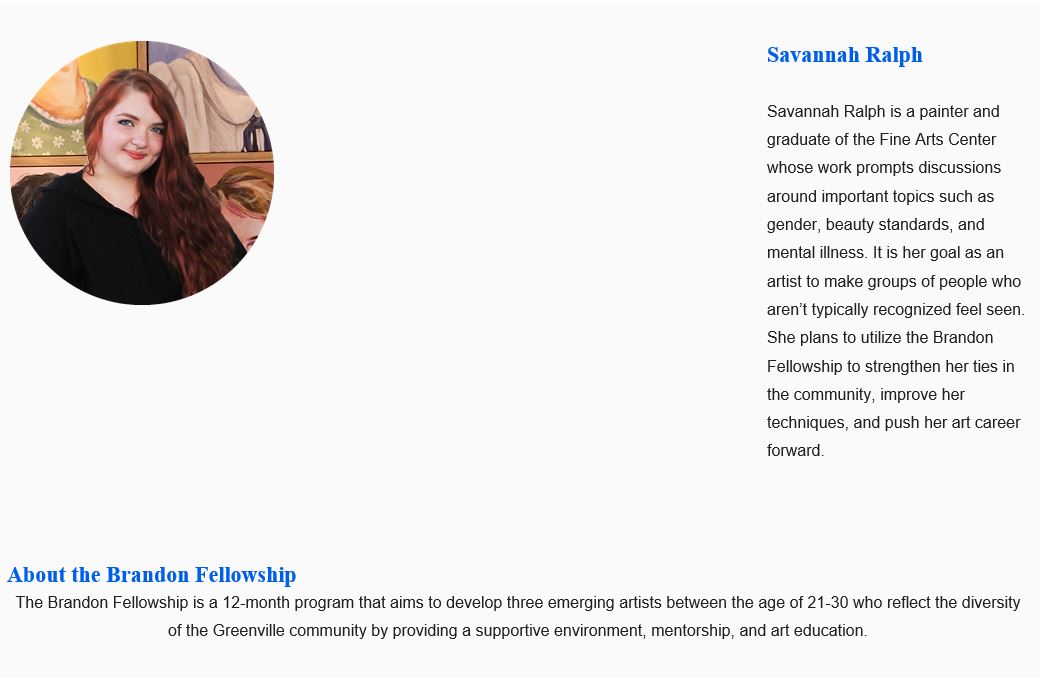 FAC Alumnus, Cleve Wilson, co-wrote the title track and produced Thomas Rhett's album, Center Point Road, which was nominated for Album of the Year. This is Cleve's first nomination.

Acclaimed by the New York Times as “the versatile violinist who makes the music come alive” and for her “tonal mastery” (BBC Music Magazine) and “searing intensity” (American Record Guide), violinist Kelly Hall-Tompkins is forging a dynamic career as a soloist and chamber musician. Recently featured on NBC’s Sunday Closer for her work with bringing classical music to homeless shelters.

Film Department graduate, Rory Scovel, recently inked an 8 episode deal with Comedy Central for his new show, “Those Who Can’t.” He previously starred in the TV shows, “Wrecked,” and “Undateable” and in the feature films, “Dean,” and “The House” with Will Ferrell. His one man special, “Tries Standup for the First Time,” is currently available on Netflix. 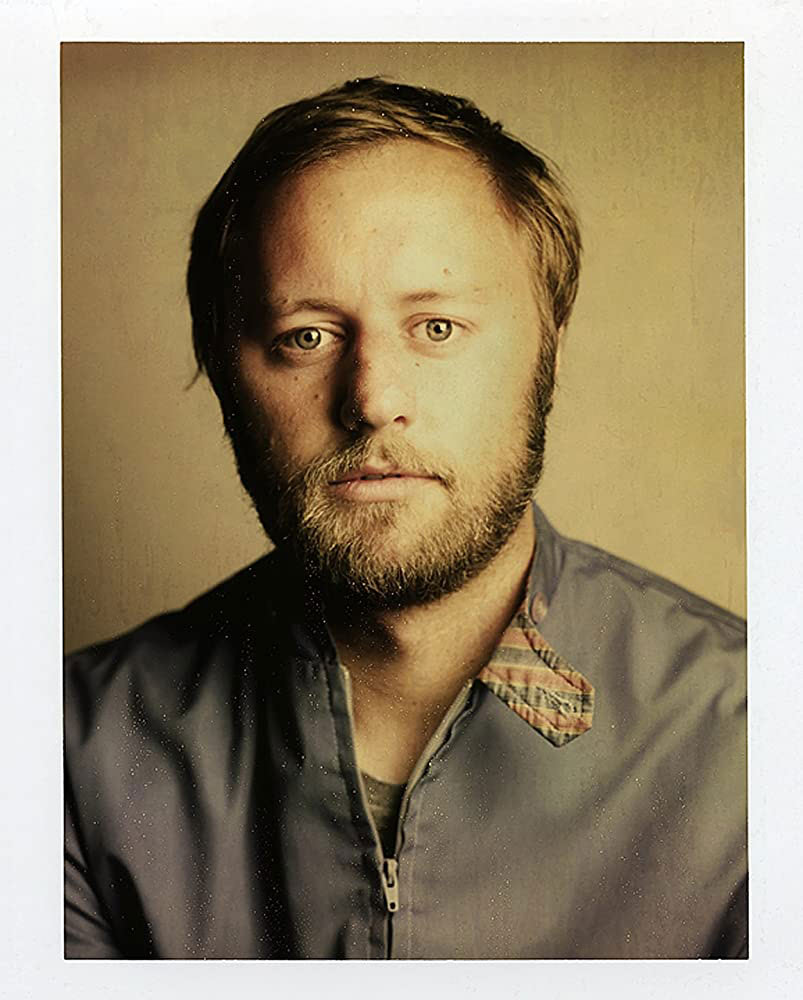 American Mezzo-soprano, Betsy Bishop, has sung with leading opera companies all around the world such as The Metropolitan Opera, Washington National Opera, Lyric Opera of Chicago, Palm Beach Opera, Florida Grand Opera, and Cincinnati Opera. She was recently hired as a professor of voice at The Juilliard School.